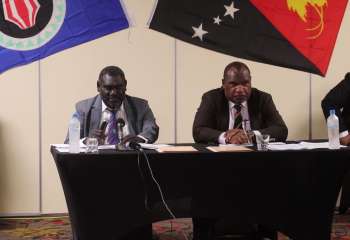 The Autonomous Bougainville Government has called for a deferral of the proposed Joint Supervisory Body meeting following failure of the National Government to progress the development of the Constitutional Regulations.

In the last meeting of the Joint Supervisory Body in April this year, the ABG had shared its proposed draft of the Constitutional Regulations – which is the final agreement that provides a legal guide outlining the process by which the Independence result will be brought into the 11th National Parliament.

Following this, the National Government’s technical team was instructed by the Prime Minister to engage with the Bougainville Technical Team to progress a jointly agreed draft of the Constitutional Regulations, however there has been no significant progress made to date.

ABG Minister for Bougainville Independence Mission and Attorney General Hon. Ezekiel Masatt says this ‘lack of commitment’ from the National Government has frustrated the ABG leadership resulting in a call for a deferral of the joint meeting initially proposed to happen this week in Port Moresby.

“The ABG and the National Government have conducted and concluded all joint post-referendum consultations resulting in the signing of the Era Kone Covenant under which the parties have agreed to implement the Referendum Results on Independence through Constitutional Regulation. That is, and must only be, the focus of our joint technical teams’ discussions,” he said.

Minister Masatt says as per the agreed Referendum Results Implementation Roadmap jointly signed by the Bougainville and PNG governments in July 2021, ratification was agreed to occur in 2023.

Speaking on the matter for nation-wide consultations, Minister Masatt clarified that the ABG maintains that ratification of the outcome of the consultation will be done by the National Parliament and does not require the citizens of Papua New Guinea to be consulted on the matter.

“There is no legal basis for the proposed nationwide consultation that the Prime Minister and the National Technical Team are proposing. The provisions of the Organic Law on Peace Building and the 2001 Bougainville Peace Agreement required the people of Bougainville hold a constitutionally guaranteed referendum where in 2019, 97.7 percent of Bougainvilleans voted for independence,” Masatt stated.

“It is therefore the requirements of the same laws that the ABG and the National Government are the only two parties that will consult on the overwhelming 97.7 percent outcome of the referendum, and there was no mention of a nationwide consultation on the matter. The nation-wide consultations are unconstitutional and the ABG again rejects this position by the National Government’s technical team.”