THE DEPARTMENT OF COMMUNITY GOVERNMENT AND DISTRICT AFFAIRS:

Headed by ELLY SAWA Secretary under the ministerial leadership of Honorable THOMAS PATAAKU, Member for Ramu Constituency, ABG Minister for Community Government. Its mandate is focused on:

The Bougainville Disaster Coordination Office was launched at Kubu, Buka Island in September 2014. The National Minister for National Planning and Monitoring, Charles Abel officially opened the Bougainville Disaster Coordination Office. The Minister and his delegation were in Buka for a week long visit of High Impact Projects on Buka Island and mainland Bougainville. Abel was accompanied by Acting National Planning Secretary Juliana Kubak and other government delegates. The building is funded by the Special Intervention Fund ( SIF ) to ABG by the National Government. The office is responsible for managing natural and human-caused disasters in Bougainville.

Since the office was established the  Bougainville government, the Provincial Government of Tinputz district and development partners finalized the first District Disaster Risk Management (DRM) Plan for the district.

This model Tinputz District DRM Plan has been jointly drafted by the district level agencies and development partners with technical assistance from Disaster Risk Management Office of the Autonomous Region of Bougainville and UNDP.

The plan was developed through a comprehensive and participatory process, involving all district agencies, non-governmental organizations, the private sector and faith-based organizations, as well as community consultations.

What is Community Government? 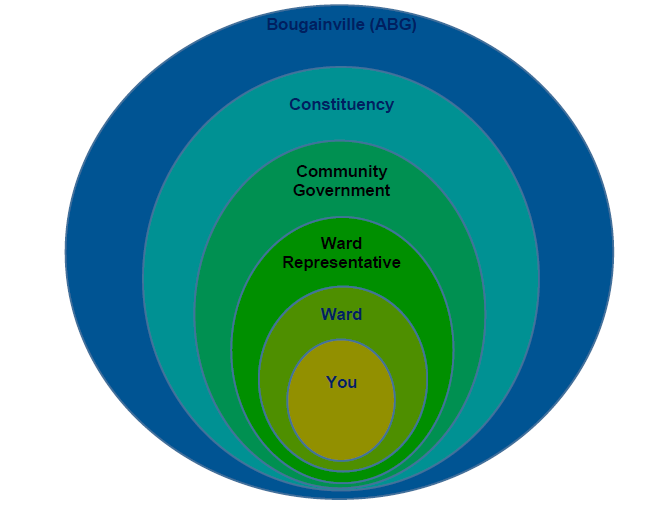 A Ward Steering Committee is not a formal level of government but brings the Ward   Representatives together with other people chosen by the community in whatever means appropriate. The role of the Committee is to provide administrative and operational support to traditional chiefs, other traditional leaders and village courts. Committees also identify development needs, for example: impact of natural disasters, requirement for conflict resolution, issues relating to health, land and environment of the Ward.

Sources of funds for Community Government is money appropriated by the House of Representatives or National Parliament, taxes and rates, imposition of administrative fees, commercial activities, and borrowing or investing, among others.

Elections are held every five years within twelve months of the ABG election. Elections are conducted by the Bougainville Electoral Commission.