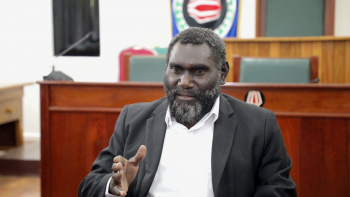 The Autonomous Bougainville Government remains the only legitimate government on Bougainville and it does not bend to the will of any self-serving faction that assumes it can operate outside of the ABG’s purview.

In light of this I want to make it clear that my government does not support Noah Misingku and his U-Vistract faction nor do we condone their activities on Bougainville.

I was vehemently clear on this matter when I visited Tonu with an ABG delegation last year.

There is no evidence to show that they are supporting Bougainvilleans through agricultural projects, homeownership schemes and subsidizing school fees for students with their illegal tender, the so called Bougainville Kina.

I would like to caution the Members of the Autonomous Bougainville Government to refrain from aligning the government to these factions.

We are a legitimate government and we should not kowtow to any faction or self-proclaimed monarchs that do not serve the best interest of the government and the people of Bougainville.

The recent visit by three ABG Members to Tonu to visit Mr. Misingku though positive in collaboratively engaging with the people of Tonu and the greater Siwai District, was not sanctioned by the government.

As leaders they have a right to address the people but keeping in mind they do not destabilize the prerogatives of the government on sensitive issues such as this.

The people within the Tonu area are Bougainvilleans and they deserve to receive government support and services but Mr. Misingku’s faction is illegal and his actions have so far defeat the purpose of a unified Bougainville.

Inclusivity is important but it must be done in the right way and that way is for Mr. Misingku to realize that his faction is subservient to the ABG and not the other way around.

My government will continue to provide services for our people in Tonu because despite allegiance to the Misingku faction they are still Bougainvilleans and the ABG is their government.

As President I categorically deny the claims by the three ABG MP’s that the Autonomous Bougainville Government is aware of the so called projects initiated by Mr. Misingku’s faction.

I would like to remind every ABG MP that we have a responsibility to this government and our people. Through this responsibility we have our Independence Mission that must never be compromised, we must remain steadfast and committed to it.

In the third year of my term I will be clamping down on illegal activities on Bougainville. There is no place for people and groups who assume that they are a law unto themselves because Bougainville is far greater than any one person's thirst for greed and lawlessness.