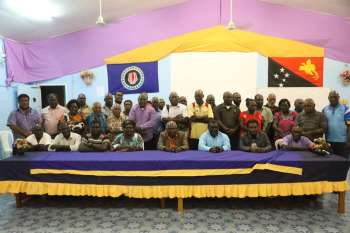 The formulation of an autochthonous Bougainville Constitution is tantamount to fulfilling the felt needs and aspirations of Bougainvilleans as a means to empowering them socially, economically and politically.

As Bougainville prepares for nationhood the creation of the Bougainville Constitutional Planning Committee (BCPC) is another important step the Toroama led Autonomous Bougainville Government is embarking on.

The purpose of the induction is to ensure that each commissioner is kept abreast with the government’s vision for the constitution of an independent Bougainville.

The induction introduced the commissioners to Bougainville’s political roadmap, the commission’s guiding principles, international standards in constitution making process and sharing their experiences.

Bougainville President Ishmael Toroama with Vice President Patrick Nisira and the Attorney General Ezekiel Masatt were present at the closing of the 4-day induction in Arawa Town last night.

“Preparations determine the outcome of any process; nation building is no exception and the crafting of the constitution of an Independent Bougainville will depend on how we prepare for nationhood,” President Toroama said.

“We are going to create a homegrown constitution for the government and the people of Bougainville. It will be based foremost on protecting the people’s rights and empowering the government to efficiently and equitably distribute services to the people,” President Toroama said.

President Toroama who is also chairman of the BCPC further thanked the BCPC Secretariat for its efforts in guiding the BCPC.

He encouraged his fellow commissioners to be proactive in ensuring the Bougainville Constitution gauges the views of the people and captures the vision of the people to be free and governed within a democratic legal framework.

The BCPC also presented the President with a resolution from their induction which the government will look at to ensure its effectivity in consulting the people.