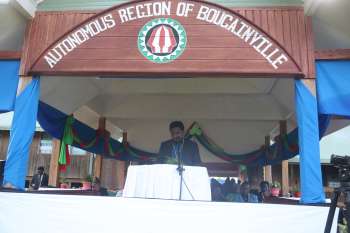 Seventeen years ago on 15 June 2005, the members of the first Bougainville House of Representatives were sworn in under the leadership of the first President of Bougainville, the Late Honorable Joseph Kabui.

At the Dawn Service this morning held at the Parliament House in Kubu, Buka, the ABG Vice President reflected on Bougainville’s journey, saying that Bougainville has come a very long way.

“Here we find ourselves, in the 21st century, about 400 years after being discovered by European explorers, 100 years since the Christian faith was brought to us, 34 years since the Bougainville Crisis, 21 years of implementing the Bougainville Peace agreement, and 17 years of exercising an Autonomous Government arrangement, we are still charting with perseverance our path to become the next independent island nation in the pacific,” Nisira said.

“Under the Toroama-Nisira government, the agenda of the implementation of the BPA remains the highest priority by ensuring that the cause for our fight for Independence is not forgotten.”

Vice President Nisira called on all Bougainvilleans to be prepared for the changes that will inevitably take place in Bougainville’s political journey.

He said the ABG has already embarked on its Independence-Ready program which aims to collectively see individual Bougainvilleans positively contributing and preparing to make Bougainville an independent nation.

Vice President Nisira who is also the Minister for Commerce, Trade and Economic Development, further called on Bougainvilleans to support the government’s call to improve the economic environment on Bougainville.

“Our vision is to achieve a status of life where all Bougainvilleans are happy and satisfied with their living standards and the quality of government services received. In order to achieve this, we must all contribute to the improvement of our lives, as it is a collective effort.”

“Whether you are subsistence farmer, a mother, a student, a fisherman, a cocoa farmer, a public servant, an employer of a small company, a PMV driver, etc. We all have an important role and responsibility. We all have a job to do. We must now all take up these roles with pride and ownership knowing that in one way or another, by our positive actions, we are contributing to the Independence of Bougainville,” he said.

Nisira reminded the people that as the celebrations happen today for our foundation, they must not forget Bougainville’s historic past.

“As we come together to celebrate the foundation of our Bougainville Government, let us commemorate the efforts of our forefathers and mothers who began the movement to be liberated as an ethnic group of people.”

“Let us be proud of our journey of resilience and bravery to stand up for our dignity, heritage and history, which form the foundations of which our government is built and let us embrace the bold future ahead of us.”