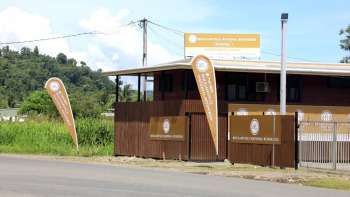 Bougainville’s endeavour to increase fiscal self reliance under the Toroama Administration has achieved another milestone today with the commissioning of the Bougainville National Refinery’s generator.

The 150KVA generator was commissioned by the Autonomous Bougainville Government Minister for Finance and Treasury Mathias Salas in Arawa Town.

“This is an important milestone for us as we strive to raise internal for Bougainville through economic development projects,” said President of Bougainville Ishmael Toroama.

“The projected annual turnover from Bougainville National Refinery is estimated to be about K150 million to K200 million,” President Toroama said.

“This will quadruple the current internal revenue of K50 million which we only doubled from K25 million last year,” President Toroama revealed.

President Toroama explained that under the 60-40 arrangement between the investor and the government, 10 percent of the revenue will be reserved for community projects in the constituencies on Bougainville.

President Toroama said that the gold refinery will be going online next month once the rest of the equipment (currently on transit from Port Moresby) arrive on Bougainville.

President Toroama urged the people to take advantage of the services provided by the refinery and to ensure its operations are not jeopardized by persons who threaten it.

Currently an estimated K300 million worth of gold from alluvial mining leaves Bougainville’s shores for markets in Port Moresby.

The ABG is finally tapping into this market by regulating the sale of gold on Bougainville and providing competitive prices to gold dealers through Bougainville Refineries Limited.

This will enable the government to earn revenue and increase its fiscal reliance capacity.

An increase in internal revenue will allow the ABG more control over its financial affairs as opposed to its current situation where the government solely relies on intergovernmental funding arrangements from the Government of Papua New Guinea.

The refinery is expected to launch its operations in early February once the equipment are installed.