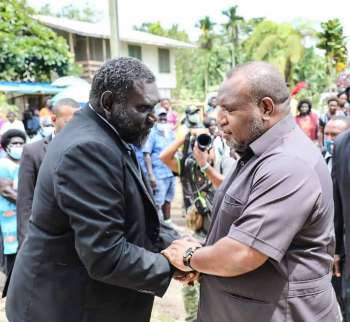 On behalf of the government and people of Bougainville I would like to extend our warmest congratulations to the Hon. James Marape on being sworn-in as the Prime Minister of Papua New Guinea.

I also congratulate the Speaker of the House Hon. Job Pomat and the other members of parliament who were sworn-in yesterday into the 11th National Parliament of Papua New Guinea.

The 11th National Parliament will play a pivotal role in determining Bougainville’s ultimate political future when it ratifies the 2019 Bougainville Independence Referendum Results.

The Referendum Results voices a clear 97.7 percent outcome where Bougainvilleans voted for political independence from Papua New Guinea in 2019.

Since my inauguration as the President of Bougainville in 2020, Prime Minister Marape and I have built a rapport that is based on mutual trust and respect despite our differing opinions on Bougainville’s political future.

The 2001 Bougainville Peace Agreement has been clear on how both the ABG and GoPNG must implement its provisions on Bougainville’s political future.

There are no short cuts, the BPA’s implementation must be done according to the existing legislative framework on peacebuilding on Bougainville.

I look forward to continue to implement the BPA in partnership with Prime Minister James Marape and the National Government.