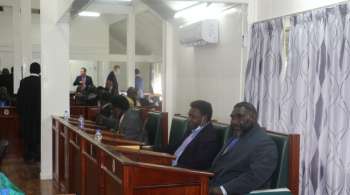 The Constitutional Regulations will enable the ratification process to be an all-inclusive democratic process that will ensure considerations are given to the people of Bougainville and the 97.7% result for a sovereign independent Bougainville.

ABG President Hon. Ishmael Toroama made this statement today when delivering his ministerial address in the Bougainville House of Representatives parliament session.

President Toroama informed the House that he had just returned from a Special JSB meeting with the Prime Minister in the past week, where the two leaders jointly endorsed the Era Kone Covenant.

“The Era Kone Covenant activates the next important stage in the Bougainville Peace Process and this is the drafting of the Constitutional Regulations. The Constitutional Regulations will give clarity to the ratification process by the National Parliament while taking into account the referendum results and the Post Bougainville Referendum Consultation Report,” Toroama said.

While the Era Kone Covenant will provide the legal pathway to bring the referendum results into the National Parliament through the Constitutional Regulation, it also commits both governments to jointly formulate a report to brief the 11th National Parliament on its role in Bougainville’s post referendum process.

“A report on the outcomes of the Joint Consultations will be furnished by the Joint Technical Team to brief the 11th Parliament in 2023. Henceforth, the Era Kone Covenant will act as a guide to successive Joint Supervisory Body meetings,” Toroama explained.

President Toroama thanked Prime Minister James Marape for his commitment to Bougainville and this Fourth House after its establishment in September 2020.

“Despite his differing views on our political aspirations his support has allowed our government to make a lot of progress since we began the Joint Consultations last year,” he added.