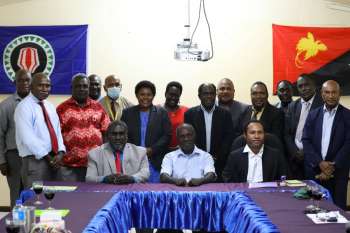 The Autonomous Bougainville Government has sworn-in ten new Secretaries to head its government departments in the Bougainville Public Service.

This follows the Toroama Nisira Government’s recruitment exercise for the senior positions in the Bougainville Administration that commenced with the departmental heads.

Amongst the ten departmental heads sworn in today was Chief Secretary to the ABG Shadrach Himata who has been in an acting capacity for almost two years.

The other nine persons sworn in today as new Secretaries are;

Secretary for Community Government, Elly Sawa was not sworn in today due to being on duty travel in Port Moresby.

President Ishmael Toroama encouraged collaboration engagement between the departments in dealing with their respective priorities and implementing Bougainville’s Independence Mission.

President Toroama also stressed the need for departments to start utilizing the Sharp Agreement to draw down powers and functions from Waigani as well as creating a better relationship between the political and administrative arms of the ABG.

President Toroama expressed his optimism in building a cohesive partnership between the two arms of the ABG to ensure efficient service delivery and gaining traction in the Bougainville Independence Mission.

He urged the newly sworn in secretaries to carry out their duties with integrity, accountability and transparency.