Healing and reconciliation in the heart of Panguna 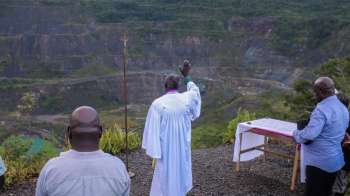 The defunct Panguna Mine is often referred to as the heart of the Bougainville Civil War (1988 – 1997) that resulted in the closure of one of the world’s largest copper and gold mines over thirty years ago.

The conflict proved to be one if not the darkest periods of modern Papua New Guinea history with the destruction of billions kinas worth of property, the loss of over twenty thousand lives and the largest singular call out of the Papua New Guinea Defense Force.

Whilst talks on reopening the mine are pending the Autonomous Bougainville Government under the leadership of President Ishmael Toroama has embarked on ensuring the landowners of the Panguna area come to a mutual agreement on the issue and are properly reconciled.

The Bougainville Council of Churches led a Dawn Service at the Panguna Mine pit as early as 4 am this morning, attended by the ABG Chief Secretary, Shadrach Himata and a number of Department Heads.

A formal combined Sunday Catholic Mass was held in what used to be the former Panguna Township, where the Kurabang and Bakoringku clans reconciled.

Both clans acknowledged that the indifference and infighting between the Kurabang and Bakoringku clans fueled by the local general opposition to the Rio Tinto operated Bougainville Copper Limited that led to the Bougainville Conflict.

The Guava Mass Reconciliation program is being implemented under the Panguna Mine Dialogue Strategy - a homegrown initiative developed by local leaders and endorsed by the Bougainville Executive Council to resolve 63 outstanding cases.

Component A of this strategy covers a range of processes and activities with the ultimate aim of solving outstanding issues and negotiating the possible reopening of the mine.

Following the reconciliations President Toroama will visit Guava Village and the grave of revolutionary leader Francis Ona next week.

President Toroama who was the Bougainville Revolutionary Army’s Commander will also formally revoke the BRA’s Standing Orders of 1990 to signify the cessation of all hostilities and activity of the BRA on Bougainville.