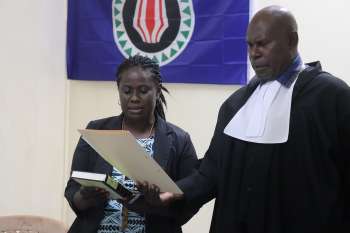 ABG President Hon Ishmael Toroama has announced the appointment of a new cabinet Minister in the Bougainville Executive Council.

The ABG Member for North Bougainville Women Hon. Amanda Masono has been appointed as Minister for Lands, Physical Planning and Environment and Conservation, bringing the total number of female members in the Bougainville Executive Council to three.

“For the very first time the Bougainville Executive Council will have three women leaders as cabinet ministers of the Autonomous Bougainville Government,” Toroama said.

President Toroama thanked the outgoing Minister and Member for Hagogohe Constituency Robert Hamas Sawa for his services during his term as Minister for Lands.

“In the last twenty-four months Hon. Sawa played an important role in leading the department. His noteworthy contributions include the drawdown of the administrative powers and functions for the creation of our Land Board and continuing the development of Bougainville’s Lands Act,” he said.

President Toroama reiterated that land is a key factor in all sectors of development in Bougainville, and encouraged all Bougainvilleans to trust the government and adopt a progressive mindset to ensure tangible development is felt and seen by our people.

“The sanctity of land to our people is so sacred that it drove us to start a revolution to protect our lands and defend our rights as indigenous custodians of our land. Regrettably this experience has conditioned us to be suspicious of development in all forms that requires the use of land,” he said.

“My encouragement to our people is that for tangible development to manifest, people have to adopt a progressive mindset. They have to learn to trust the government and its decisions on developing land and introducing new concepts to improve our socio-economic capacity.

“We cannot complain about lack of services and financial capacity when we become impediments to development,” Toroama said.

Under the leadership of the new Minister for Lands, President Toroama highlighted key areas of focus for the Lands Ministry including:

Newly appointed Minister for Lands, Hon Amanda Masono thanked the President for the opportunity to serve Bouganville in this new capacity and also acknowledged the outgoing Minister saying that she will continue from where he left off.

“As newly appointed Minister, I will do my very best to ensure that while occupying this Ministry that the Land Bill is not just passed but it is also economical for Bougainville as we prepare for independence.

“We also have the long outstanding Environmental Bill that we need to tick off on as one of the key legislations for the Department. And Climate Change, let us take advantage of bilateral agreements that PNG has with other countries for the benefit of our people but that will only be possible through a climate change policy,” she said.

Minister Masono was officially sworn in this morning in the presence of the ABG President, Cabinet Ministers and public servants.