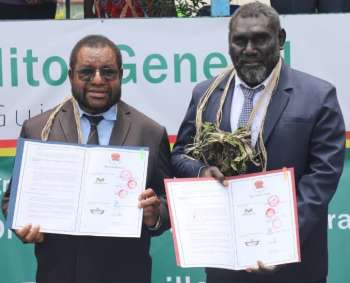 I also extend a warm welcome to our citizens who are with us at the Bel Isi Park to witness the signing of the Memorandum of Agreement of mutual Cooperative Agreement between the Office of the Auditor General and the Autonomous Bougainville Government.

Bougainville and greater Papua New Guinea are built on societies that place value in our relationships and our communities. In other words, we are a people who put stock in serving the purpose of our tribes, clans and families ahead of serving the purpose of individual interests. With the introduction of modern ideals infusing themselves with our cultural values we are now witness to a new values system where individualism has given rise to corruption and the moral decay of our society.

It would be incorrect to say that any society, organization or government for that mater are immune to corruption. Nepotism (Wantok System), misusing public funds, claiming percentages in government contracts and insubordination are all forms of corruption. In Bougainville corruption has become systematic and is embedded within the Autonomous Bougainville Government both at the political and administrative levels.

At the political level we have leaders both in the ABG and National level who are abusing their mandate to serve the people by serving themselves. It is unfair to the people of Bougainville when leaders misuse public funds and assets for personal gain. It is also very unfair to the people of Bougainville when these leaders abuse their powers in office to push their own greedy agendas and incite disunity on Bougainville. As leaders we all swore an oath to protect our people and defend their rights. It is shameful that we break this oath and allow our integrity to be tainted by corruptive practices.

As Bougainville prepares for independence, good governance is a cornerstone to determining our future as a democratic sovereign nation. Good governance is not limited to governance and politics alone. It is necessary for development in the social and economic sectors as well. Hence, it is important that we start laying the foundations for a government that practices good governance and represents the best interest of the people of Bougainville. We must have systems and mechanisms in place to advocate accountability and transparency within the halls of our government and our public service.

The signing of this Memorandum of Agreement with the Office of the Auditor General is a step in the right direction for Bougainville. The MOA will provide us with support from the Auditor General’s Office to offer checks and balance while accommodating the ABG’s need for greater accountability on how public funds are being used. This arrangement will also present us with an opportunity to do a performance audit on our public service and gauge its effectiveness in service delivery.

The engagement of the Auditor General not only covers the ABG but our four Members in the National Parliament as well. Every Bougainville leader and persons in the public service must be held to account for our actions.

To support the Auditor General we have the Ombudsman Commission who have established an office on Bougainville. We also have the Bougainville Auditors Office and the Bougainville Senior Appointments Committee which appoints senior office holders and acts as a disciplinary mechanism. These entities are designed to provide checks and balance within the government.

At this juncture I would like to announce that I will be introducing an Anti-Corruption Bill on the floor of the Bougainville House of Representatives. I want to make an open invitation to every Member of the House to support this initiative. Just like our independence mission this initiative should be embraced by every leader in the Bougainville House of Representatives.

Before concluding I must state that despite our best efforts to mitigate and alienate corruption on Bougainville we are stillfaced with the problem of enforcing anti-corruption measures.Our desire for reform cannot be realized if there is no practical action to ensure that these measures hold to account those who break the law.Without enforcement these measures will have no effect at all.

I encourage our leaders, our public servants and our citizens to have a vested interest in promoting good governance and clamping down on corruption. It is time to move out of the individualistic mindset and focus on the greater good of Bougainville. It is time we create an industrious Bougainville that places value on good governance, accountability and transparency.

God Bless you all and God Bless Bougainville and Papua New Guinea.