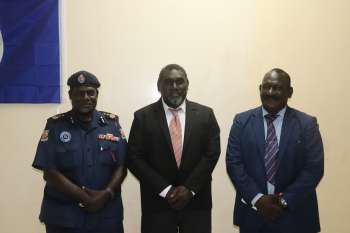 A new Minister has been appointed in the Bougainville Executive Government to lead the Police and Correctional Services Ministerial portfolio.

President Toroama thanked the former Minister for his efforts in setting the foundation for the transformation and reforms in the Bougainville Police Service and Correctional Services.

“It was a difficult task to accomplish in maintaining law and order in Bougainville and improving the capacity of Bougainville Police Service and the Correctional Services. I thank him for his leadership and contribution in the Ministry for Police and CS in the last twelve months,” he said.

Speaking on the status of Bougainville Police Service, President Toroama said the current model is one that was adopted to complement Bougainville’s peace process.

“As a post-conflict region it was important to maintain law and order but doing so in manner that it did not create already a society that was traumatized by the armed conflict,” he said.

“It is an agency that focuses on relationship building with our communities throughout the local agencies to reduce social disorder. Its response strategy requires the Bougainville Public Service to look at the underlying cause of crime and mitigate it through community engagement.”

President Toroama emphasized that should criminal elements in Bougainville continue to show disregard for the law, then stricter measures will be taken by his government.

“We have to realize that Bougainville is privileged to have a police service that functions in a manner that it does today. If we continue to disregard the law then this privilege must be taken away with stricter law enforcement on Bougainville,” he said.

Newly appointed Minister for Police and Correctional Services in his remarks thanked the President for the confidence shown in him and pledged his commitment to ensure that the Bougainville law agencies are equipped to perform in the best interest of Bougainville.

“Before the year 2022 ends, as your Minister for Police and Correction Service, I will go back to the basics in this department and strengthen key components to make this Ministry an operational workforce to 100 percent,” he said.