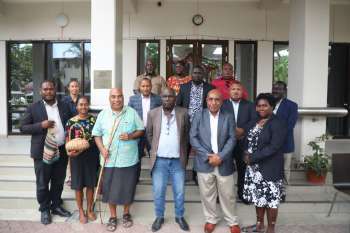 I have the honour to express my sincere appreciation to the Prime Minister of Papua New Guinea, Hon. James Marape, MP and the Department of Foreign Affairs & Trade for facilitating my government’s inaugural official Trade and Investment visit to the Solomon Islands from the 26th to the 29th of November 2022.

The joint encounter provided an opportunity to reaffirm that the Autonomous Region of Bougainville and Solomon Islands are longstanding traditional neighbours with shared democratic values and interests aligned to positions on key regional and border issues, strong people-to-people ties, and a growing and mutually beneficial trade and economic relationship.

The officials jointly agreed to explore trade and investment opportunities along the common border and beyond in each country. I am pleased with the agreement by the officials to also hold further joint talks in consultation with the National Government of Papua New Guinea to regulate trade, deepen economic integration and foster mutually beneficial trade and investment links between our respective private sectors.

On behalf of my government, I would like to formally thank the Ministry of Foreign Affairs & External Trade of Solomon Islands which has already carried out its own internal consultative activities to regulate trade along the Western and Eastern Borders of Solomon Islands with Bougainville in Papua New Guinea. I was pleased to be informed that the Ministry has completed its assessment on Temotu Border and consulted Honiara-based government agencies, banking, and the private sector at large.

I welcome the commitment by Solomon Islands to conduct further consultations with her population along the common maritime border, including series of talks with my government in Buka and Port Moresby during 2023 with the view to establish an agreed Trade and Investment Framework. This is in line with my government’s internal plans to make Bougainville economically self-reliant.

The most important agenda of my term in office is not just to deliver the separate political independence to my people based on their 97.7 percent votes, but equally provide leadership in creating an economic environment conducive to maintaining the principle of self-reliance, in which every Bougainville citizen builds and develops an economy that can be operated by one’s own efforts by relying on one’s own natural resources using every available technology and through one’s own creative labour and knowledge. Likewise, it is also important for my people to reach out and seek trade and investment opportunities internally and with our neighbours in this region as economic interdependency is the norm given the current trends in geopolitics and associated trade and investment partnerships being forged in this region and across the Pacific.

My government will continue to reach out and seek trade and economic opportunities for my people both here and abroad. I am fully committed to ensuring that all relevant domestic procedures through the Bougainville Inward Investment Bureau are completed to facilitate the Trade and Investment Framework agreement for signing during my term as the President of Bougainville.

I am looking forward to the further joint talks in Buka and Port Moresby to establish the agreed Trade and Investment Framework between the Solomon Islands and the Autonomous Region of Bougainville, which will be an impetus for delivering important economic, commercial, and broader benefits to consumers, small and large businesses, and farmers in Bougainville and in the Solomon Islands.

I reiterate my government’s undertaking to remain committed to facilitating, enhancing, and regulating trade and investment between the Autonomous Region of Bougainville and the Solomon Islands in consultation with the Government of Papua New Guinea.