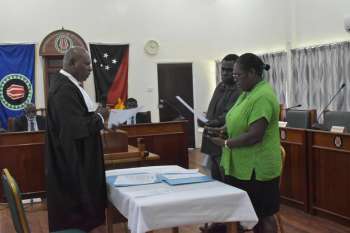 The winning candidate in the Mahari Constituency by-election Carol Poli was officially sworn in today as a Member of the Bougainville House of Representatives by the Resident Magistrate Mike Pelimen.

The swearing in ceremony happened at Parliament House today, two days after the Writ for the by-election for Mahari Constituency was returned to the Speaker, Hon. Simon Pentanu on Monday 2nd May 2022 by the Bougainville Electoral Commissioner Mr. George Manu.

In his remarks, Speaker Pentanu congratulated Hon. Carol Poli saying she has added to the number of woman leaders in the Bougainville House of Representatives and this in itself is a record at this time.

“You will know very soon the roles that you will play, the responsibilities and the obligations as a member.”

“We will always be at your disposal for assistance, for advice, or for any queries that you will have. The Clerk of the House, the Deputy Clerk who is our procedural person of the House and all other parliamentary staff who are here,” said the Speaker.

Member-elect Hon. Carol Poli, acknowledged that it was a challenge in raising her hand to be one of the candidates but she had to keep going for the benefit of her people.

“That is why during the declaration at the United Church (counting centre), I had to thank everyone,” she said.

“It’s time that we work together with the Mahari Spirit and we bring in things that we always wish to have, and things that we have missed out on over the past years. But despite that, let us appreciate the past leadership and we will continue to improve on that and move on under the banner of independence ready mission,” Member Poli added.

The small but significant ceremony was witnessed by the Speaker of the House Hon. Simon Pentanu, the Clerk of Parliament Robert Tapi, the Deputy Clerk Peter Topura, the Member for Peit Constituency Hon. Bernard Bobos, Member representing women in North Bougainville Hon. Amanda Masono and staff of Parliament.