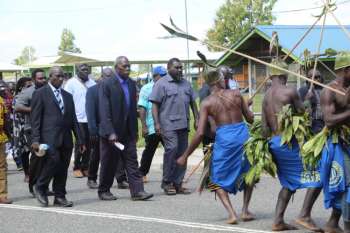 As Bougainville continues to make great headway in its political development, we must also ensure that our socioeconomic development is on par with our independence ready mission.

President Toroama made this bold statement today in parliament, highlighting the urgency to hasten internal preparations towards economic development.

“We already have several high impact projects that are being initiated by this government but we are yet to capture the low hanging fruits through the industries that Bougainvilleans are already involved in. We need a strong Bougainville Economic Development Strategy that will allow us to harness revenue from economic projects,” Toroama said.

“It is time we stopped procrastinating with plans that do not go beyond the paper they are written on. We must practicalize economic development and start earning revenue for Bougainville.”

President Toroama called on all Bougainville landowners to begin to put trust in the government and work together with the government to support its economic initiatives that will contribute to revenue raising.

“My government has always adopted a rights before resources approach to development where we place the rights of the people above monetary and financial value. By respecting landowner rights, we expect the landowners themselves and the investor to comply with our economic laws and regulations to avoid problems.”

President Toroama however highlighted that there have been a number of foreign companies who have set up in Bougainville but have had to forego their investments and assets due to landowner issues and criminal activities.

“We may complain about the government not doing enough to support economic development but our greatest impediment is ourselves when we refuse to support the government’s economic initiatives. If we continue along this path, there will be no real economic benefits to support our Independence agenda,” President Toroama said.

President Toroama noted that while Panguna is a key economic booster for Bougainville, his government will not bank on it as the only source of revenue, saying that Panguna must be seen as complementary to our economic growth.

“It (Panguna Mine) must not impede our desire to grow other investment opportunities for Bougainville that will provide revenue, it must be seen as complementary to our economic growth.”

President Toroama further clarified that there is no secret ploy by his government to undermine the Panguna Landowners.

“I want to make it clear to the Panguna landowners and the people of Bougainville that my government has not made any commitment to any mining company. We are only dealing with Bougainville Copper Limited because the government is required by law to do so when it concerns the Panguna Mine. There is no secret plot by this government to undermine the landowners and give concessions to mining companies without the people’s consent,” Toroama stated.