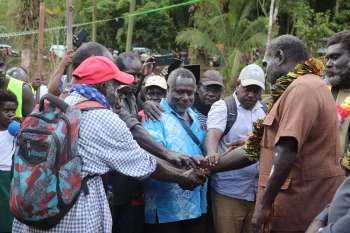 Today, as President, he led an ABG delegation back into Guava Village in the Panguna District – home to Bougainville’s secessionist leader the Late Francis Ona.

The day was significant as it also marked 17 years since the passing of the Bougainville Revolutionary Leader.

President Toroama’s visit into Guava Village today signified his government’s recognition of the Late Francis Ona as the supreme leader of the Bougainville Revolution, the removal of the stigma of the Bougainville Conflict from Late Ona’s family, revoke the standing orders that were issued at the time of the conflict and declare once and for all an end to the Bougainville conflict.

Men, women and children came in truck loads from as far as South Nasioi and Kongara to witness this historic event.

President Toroama’s visit follows a major reconciliation ceremony between the Kurabang and Bakoringku clans of Guava in the past week which saw these two clans healing wounds of the past and further strengthening their commitment to work with the Toroama government for lasting peace on an independent Bougainville.

President Toroama explained that his government’s intention is to ensure that the people of Guava are recognized, reconciled and united into Bougainville’s journey to independence.

“This is part of my government’s initiative to ensure that we continue this fight that the Late Ona started, not with guns, but through the agreed processes that we have engaged in through the joint inter-government consultations that have secured Bougainville’s independence through the signing of the Era Kone Covenant,” he said.

Following his address to the people, President Toroama visited the resting place of the Late Francis Ona where he paid his respects to the late leader and presented the obligatory customary ‘kaikai’ to Ona’s family and to the Kurabang Clan of which Ona belonged to.

President Toroama’s visit into Guava Village is part of the two-pronged approach currently being taken by the Government and known as the Panguna Mine Dialogue Strategy – a homegrown initiative developed as the way forward to discussing the future of the multi-billion kina defunct Panguna Mine.