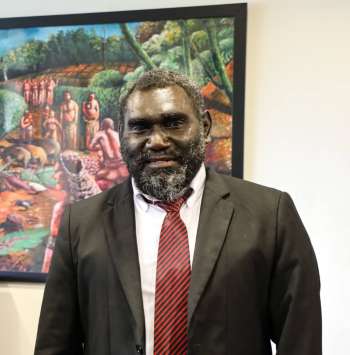 Mr. Speaker, I rise within the chambers of this honorable house to present for the very first time this year to the Honorable Members of the Bougainville House of Representatives my Ministerial Statement on Bougainville’s current socioeconomic and political state of affairs.

Mr. Speaker, I have just returned from Port Moresby last week after convening a special Joint Supervisory Body meeting with the Prime Minister of Papua New Guinea Hon. James Marape. The focus of our discussion was the formal endorsement by the JSB of the Era Kone Covenant that the Prime Minister and I signed on April 5, 2022.

Mr. Speaker, the successful outcome of the 2019 Bougainville Referendum where 97.7% of our people voted for independence triggered the Post Referendum Joint Consultations between the Autonomous Bougainville Government and the National Government.

The greatest challenge during the consultations was finding common ground in an environment where there are diverging opinions and views on Bougainville’s political future. But we have found common ground and that is through the Era Kone Covenant and with it the soon to be developed Constitutional Regulations. These will guide both governments through a very crucial time for Bougainville. I remain confident that we will reach an amicable solution to deciding Bougainville’s ultimate political future through the Era Kone Covenant and the Constitutional Regulations and we will attain independence for Bougainville.

Through the three Joint Bougainville Post Referendum Consultations we have jointly developed with the National Government, a decisive path on the future political status of Bougainville. We have jointly agreed on a timeline for Bougainville’s political settlement of not being before 2025 and no later than 2027 and we have developed a roadmap for the ratification of the referendum results in the National Parliament. Conclusively, we jointly agreed on the documented record of the three consultations now known as the Era Kone Covenant.

The Era Kone Covenant has just been endorsed by the National Executive Council and the Bougainville Executive Council. This formally concludes the process of the post referendum consultations between both governments. A report on the outcomes of the Joint Consultations will be furnished by the Joint Technical Team to brief the 11th Parliament in 2023. Henceforth, the Era Kone Covenant will act as a guide to successive Joint Supervisory Body meetings.

Mr. Speaker, I extend my gratitude to the Prime Minister, Hon. James Marape for his commitment to Bougainville and this House after its establishment in September 2020. Despite his differing views on our political aspirations his support has allowed our government to make a lot of progress since we began the Joint Consultations last year.

Mr. Speaker, before my entry into politics nineteen (19) months ago the prevalent perception of the Bougainville Public Service that I was aware of was that our public service was complacent, rampant with corruption and it had no clear sense of direction. These were fueled by reports of the misuse of government funds and assets, insubordination and a lack of cohesion between the administrative and political arms of the government and of course I make special mention of the so called ten percenters who believe they are entitled to a cut in government contracts.

In the last nineteen months, I have come to appreciate the hard work and honesty of many of our public servants. I am very grateful to those who are willing to do more than their fair share because they have a strong sense of moral obligation to our independence mission. They are the ones who give hope to the government and our people to see the Bougainville Public Service machinery as an entity that articulates the vision of the government to better serve our people. Their commitment gives credibility to the Bougainville Public Service.

The Wabag Roadmap and the Timeline for our political settlement (2025 – 2027) as well as the Sharp Agreement calls for a sense of urgency within the Bougainville Public Service to be independence ready. Every government department and agency must start assuming a pro-independent mindset and move out of the provincial government and autonomy mindset. This means the public service must start picking up the pace to efficiently deliver services to our people, it must start picking up the pace to grow our fiscal capacity and above all else we must be prepared to get our hands dirty through hard work and commitment to our Independence aspirations. We must not leave any room for complacency and corruption.

Mr. Speaker, we are in the process of recruiting our new Heads of Departments in the Bougainville Public Service. The Bougainville Senior Appointments Committee has just confirmed Mr. Shadrach Himata as our new Chief Secretary and it has also made several appointments to Heads of Department positions. I want the Bougainville Administration to give your full support to the individuals who have taken up these positions. All ministers and public servants must put aside their personal agendas and work with the new HOD’s to ensure progress and efficiency is maintained within our respective government departments.

Mr. Speaker, on that note I want to make mention of the issue of hiring and misusing hire cars from our local businesses. The use of hire cars is a privilege that public servants must use with caution and responsibility. I want to make it clear and Chief Secretary take note; in the recent months we have seen so many public servants misuse hire cars to the extent of wrecking them and even causing accidents that have resulted in unnecessary deaths. Some public servants have even begun to assume that they can easily get away with their actions and this includes the spouses and children of public servants who are driving government vehicles and using hire cars. This must come to a stop!

Mr. Speaker, whilst we concentrate on the political development of Bougainville we must also ensure that our socioeconomic development is on par with our independence ready mission. It is imperative that we hasten our preparations on economic development. We already have several high impact projects that are being initiated by this government but we are yet to capture the low hanging fruits through the industries that Bougainvilleans are already involved in. We need a strong Bougainville Economic Development Strategy that will allow us to harness revenue from economic projects. It is time we stopped procrastinating with plans that do not go beyond the paper they are written on. We must practicalize economic development and start earning revenue for Bougainville.

The Panguna Mine is key to our rapid economic growth but we must not bank on it as our only source of revenue. It must not impede our desire to grow other investment opportunities for Bougainville that will provide revenue, it must be seen as complementary to our economic growth. I congratulate the Mining Department and the five landowner groups for making headway in the redevelopment of the Panguna Mine. I want to make it clear to the Panguna landowners and the people of Bougainville that my government has not made any commitment to any mining company. We are only dealing with Bougainville Copper Limited because the government is required by law to do so when it concerns the Panguna Mine. There is no secret plot by this government to undermine the landowners and give concessions to mining companies without the people’s consent.

Mr. Speaker, in relation to our landowners, they must start to trust the government. To enable tangible development and social progress they must work with the government by releasing their lands for development and respecting the progress of the economic projects initiated on their lands. My government has always adopted a rights before resources approach to development where we place the rights of the people above monetary and financial value. By respecting landowner rights, we expect the landowners themselves and the investor to comply with our economic laws and regulations to avoid problems.

From past experience a number of foreign companies who have set up on Bougainville have had to forego their investments and assets due to landowner issues and criminal activity. We may complain about the government not doing enough to support economic development but our greatest impediment is ourselves when we refuse to support the government’s economic initiatives. If we continue along this path, there will be no real economic benefits to support our Independence agenda.

Mr. Speaker, at this juncture I want to make a special call to all the Members of this Honorable House on the need for awareness to our people on the government’s progress. Our people have the right to access information on their government and it is the prerogative of this government to provide them with credible information on development and our political aspirations. While the government is preparing to rollout an information campaign to our people in North, Central and South Bougainville, we as leaders must start educating and informing our people at the constituency level. Real progress can only be realized if we have an informed population who are able to actively participate in development through informed decision making.

Upon assuming the Presidency, I vowed to the people and government of Bougainville that I would make securing political Independence for Bougainville a priority of my government. I also made it clear that the means to attaining Independence would be done so through the established legal processes under a peace by peaceful means approach. I remain steadfast in my resolve for an Independent State of Bougainville but I do so with the understanding that there are no short cuts to this journey. Everything must be done according to the existing legal framework that governs the Bougainville Peace Process.

Mr. Speaker, Bougainville’s Independence is the divine right of our people and it is our ultimate destiny.

God Bless you all and God Bless Bougainville.