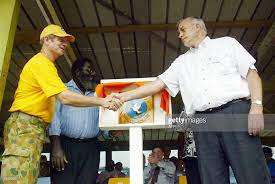 A CONDOLENCE MESSAGE TO THE FAMILY OF THE LATE SIR PETER BARTER FROM THE PRESIDENT OF THE AUTONOMOUS BOUGAINVILLE GOVERNMENT.

He contributed tirelessly to the peace process and played a leading role in laying the very first foundations of the Autonomous Bougainville Government. Prior to the formation of the ABG on June 15, 2005 he was in Bougainville to assist with the elections and to ensure there was a smooth transition to autonomy.

The people and government of Bougainville are greatly indebted to this great man for his selflessness and acts of kindness. We will remember him as a man who saw no color nor creed but a man who was believed in humanity's ability to forgive, respect and love.

On behalf of the Autonomous Bougainville Government and the people of Bougainville I offer our most heartfelt condolences to the family of the Late Sir Peter Barter.
May his soul rest in eternal peace.