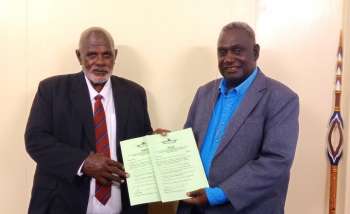 The Autonomous Bougainville Government By-Elections for Haku and Nissan constituencies has officially commenced following the issue of writs for these elections by the Speaker of the Bougainville House of Representatives, Hon. Simon Pentanu in Buka today.

Speaker Pentanu while delivering his short speech, said he was happy to issue the writs so that the people of Haku and Nissan can exercise their democratic right in electing leaders that will be representing them in parliament.

He added by saying that OBEC has gained a very good reputation of delivering credible elections both nationally and abroad and this will again be the case for these by-elections, thus he is looking forward to receiving the writs on March 6 2023 from Mr Manu after the declaration of member-elects for both constituencies.

Mr Pentanu wished those candidates that will be contesting for these two seats to campaign peacefully and to let the people decide the leader of their choice when they go to polls.

Meanwhile, acting Bougainville Electoral Commissioner George Manu has assured the people in these two constituencies that OBEC is committed to delivering credible elections so that they can have a leader that will be representing them in the ABG parliament.

According to the schedules for these by-elections, nominations will take place this week from 11–13 January while polling is set for 22 February. Counting will be from 25 February to 3 March. Commissioner Manu will be returning the writs to Speaker Pentanu on 6 March this year.