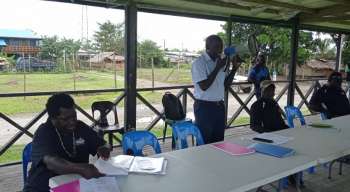 Commissioners in both regions were divided into teams to cover wards in each constituency respectively.

Team South began consultations with ward members from the Baubake Urban community government yesterday and consultations with stakeholders and interest groups will be on Friday while Team North began with Hagogohe Constituency in Buka.

The commissioners are now into consultation proper where they will collect views from Bougainvilleans to draft a new autochthonous or homegrown constitution for an independent sovereign state of Bougainville.

This consultation is one of the activities agreed upon by both the ABG and PNG government through the joint consultations that were held after the referendum vote in 2019.

The BCPC was appointed by the Bougainville Executive Council and sworn into office early this year with President Hon Ishmael Toroama as the chairman, Vice President Hon Patrick Nisira as the alternate chairperson and Attorney General Hon Ezekiel Massat as the deputy chairman and a total of 40 commissioners.

The CPC is expected to conduct consultations in three months and have a first draft of the constitution by the end of this year.

Meanwhile team Central will be starting consultation proper next week.

Bougainvilleans are urged to attend these consultations when the team visits your constituencies.