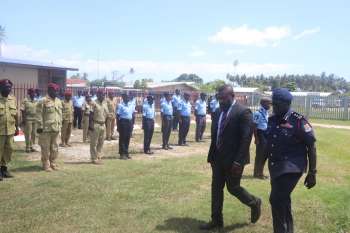 Regional Member for Bougainville and Minister for Internal Security Hon. Peter Tsiamalili Jnr arrived in Bougainville today to have a meeting on the 2023 budget.

He arrived at the Buka airport under heavy security and was a guard of honor during the inspection of the Bouganville Police Service (BPS) for North region.

Minister for Police Service and Member for Tsitalato Hon. Jon Bosco Ragu  welcomed the regional member for his first official trip into the region as the Minister for Internal Security.

His appointment to the portfolio was announced by the Prime Minister James Marape at the first parliament sitting for the new government 2023.

Apart of his role as the Regional Member for Bougainville, Mr Tsiamalili Jnr also has a duty to answer to matters that concern the Police and Correctional Service (CS) nationwide.

Mr Tsiamalili Jnr welcomed the hospitality and assured the Autonomous Bougainville Government (ABG) delegates of his commitment to making law and order programme a priority in his budget planning.

He inspected the police and correctional service and pleaded for the officers to work with him and to be disciplined in their dressing and conduct at the office and public area.

Mr Tsiamalili Jnr did not say how long he will be in Buka but was more concerned about sorting the budget for the Internal Security Ministry and the Regional member portfolio for 2023.