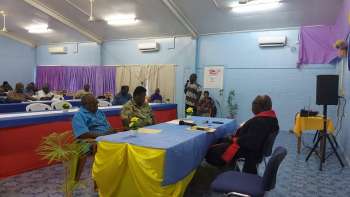 Bougainville Constitutional Planning Commission will begin its two-week long induction this week in Arawa following the swearing in of Commissioners last month.

Secretary for the Department of Law and Justice Kenneth Nanei when delivering the President’s message to the Commissioners, called on them to learn as much from the sessions while upholding the six benchmarks set by the Toroama/Nisira government as this would help them to tailor the constitution for a new Bougainville.

“We have to learn from our past, work together at gauging views from the public and write up this home-grown constitution for a new Bougainville,” he said.

These induction topics were put together by the BCPC Secretariat following questions and comments raised by the Commissioners as to how the BCPC was to conduct its roles and responsibilities.

Dennis Kuiai, a member of the Secretariat whilst addressing the commissioners during the opening of the induction stressed the importance of the workshop stating that Bougainville was now in the hands of the commissioners.

“Bougainville now going forward is in our hands –this is the first task and to deliver the first task, we will be talking to people and that is the second task,” he said.

He added that commissioners will do a lot of analysis on the views collected and in order to do so, the inductions would set the pace and the vast experiences that each commissioner has would also play an important role for them to deliver creating a home-grown constitution for Bougainville.