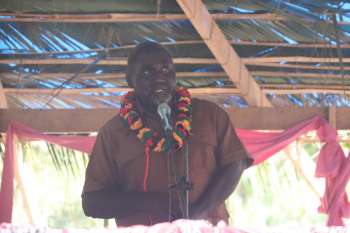 Having the character to do good for your community to become agents of change is your wealth.

This was the challenge issued by President Hon. Ishmael Toroama when congratulating the Kotu Village Authority (VA) in Kopii constituency during the ‘siwosiworo ceremony’ or traditional launching ceremony of key projects within the VA.

This launching was the first of its kind in the district and Bougainville as a whole and he and other members of the ABG acknowledged and commended such an initiative as their preparations towards independence-readiness.

“I acknowledge your initiative to strengthen good governance and customary initiations and obligations within the village level and I believe it is time for us to do so,” President Toroama said.

This ceremony was witnessed by a high delegation of leaders from the current ABG cabinet led by President Hon. Ishmael Toroama, leaders from the Me’ekamui factions and former ABG leaders in the likes of former President Chief Dr. John Momis, former ABG member for Kopii Mr. Philip Kuhena and chiefs from Siwaii district.

President Toroama further iterated that it doesn’t need many people to have one dream but it needed one person to come up with that drive to bring that vision to the people to witness.

“My delegation and others have come to witness this drive which in your belief will capture the attention of fellow Bougainvilleans and I want to congratulate you and acknowledge the person who had this vision, in fact it is in this generational leadership which has been birthed now and we are witnessing today,” he said.

According to the VA chairman Mr. Willie Hicks, the VA has a dream and vision on how to look after its people and what services it can provide for them if it is recognized as an authority.

The ceremony witnessed the launching of six projects within the VA to assist its people, which included:

Mr. Hicks also stressed that this launching was also a way to recognize traditional leadership through the chieftaincy system.

He said traditional leadership is not voted for by the people but it is inherited and recognition must be given.

He further challenged that there will be questions and doubts when witnessing such occasion because through this generational leadership we breathe out both the good and the bad characters to strengthen work within our communities.

President Toroama called on the leaders for taking the initiative and also acknowledged the helping hands in the community for supporting the VA and chiefs in initiating such projects as their contribution towards independence readiness.

“To pave way towards our journey to independence, I want to salute Kotu VA with the helping hands in the community that are helping this authority to look like a model for yourself – not for the ABG but for yourselves. We are going into political changes and closing the gap for fiscal self-reliance and strengthening our economy is the gap that I am strongly focusing on,” he said.

“I appeal to the people of Bougainville for your support as your government is doing all it can to table the result of your choice during the referendum and that is independence,” he said.