Newly elected Community Governments to be sworn in to Office 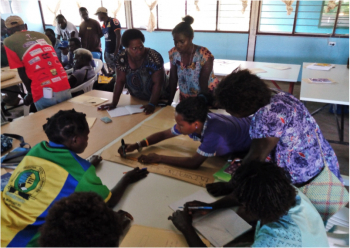 The forty-seven newly elected Community Governments in Bougainville will soon be sworn into office.

Acting Secretary for the Department of Community Government Puara Kamariki revealed this today saying that planning of the swearing in ceremonies and the election of the chairpersons is already underway.

In preparation for this, the Department will have regional workshops to ensure all Regional Directors, District Coordinators, Community Government Inspectors and Managers are ready for the swearing in of the new members.

Mr Kamariki explained that after the new members are sworn in, they will be inducted on their roles and responsibilities under the Bougainville Community Government Act 2016.

They will also receive training on how to do planning for their respective wards, including planning for Independence Preparedness Programs from the wards to Community Government to District levels, and basic accounting skills to ensure proper management of community government accounts, among others.

ABG Departments will also provide updates to the Community Government members so that they are aware of various department plans to be implemented at the wards and district levels.

Mr Kamariki also revealed that the Department will be carrying out a capacity needs assessment at all districts to identify current assets and what needs to be procured to allow for better work efficiency.

In addition to this, an audit will be done on human resources capacity to find out whether districts have the required number of various government sector officers to facilitate efficient service delivery to the people.

The swearing in ceremonies and election of chairpersons for the forty seven community governments across Bougainville will run concurrently beginning on Monday 28th February until Friday 04th March 2022.