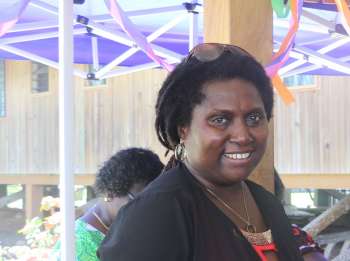 Bougainville’s Minister for the Department of Primary Industries Geraldine Paul has hailed the election of two female MP’s in the National Parliament as progressive compared to past  national elections.

Ms Paul who is a member of the Autonomous Bougainville Government’s House of Representatives is one of 5 women elected into the Bougainville Parliament.

“Breaking from convention is no easy task for a women especially in a male dominated society where leadership is viewed as a role only for men,” Ms Paul said.

“I know from experience that these two women have had to overcome a lot of stigma and challenges to earn their place in the National Parliament,” Ms Paul added.

“Leadership has no gender, Ms Peter and Ms Sawang are not women leaders, they are simply leaders because they have earned the right to be leaders in their own standing as elected representatives of the people of their electorates,” Ms Paul said.

Ms Paul said that women lift economies through their roles as mothers and primary caregiver in every family but this role does not define their capacity to go beyond domesticity.

She said PNG has evolved drastically in the last twenty years however their greatest impediment is the women themselves.

She said that until women can begin to support one another then can they realise their true potential as leaders on a larger scale.

“On behalf of the five (5) female parliamentarians of the Bougainville House of Representatives I want to offer our warmest congratulations to these two women who have proved to the women and girls of PNG that anything is possible,” Ms Paul said.