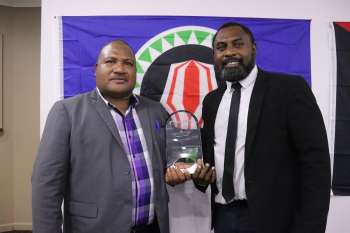 In a statement released today, Vice Minister Tsiamalili announced that under this new appointment, the Marape Government has also made available urgent funds to assist the Bougainville Atolls.

“This will include K5million to identify land resources for the resettlement of Atoll Islanders, K3million to settle outstanding liabilities to enable the resumption of shipping services utilizing MV CHEBU and K2million for urgent food and medical supplies for impacted residents,” he said.

Vice Minister Tsiamalili said that the people of Bougainville, especially the Atolls know more than most about the climate change issue.

“Bougainville saw the world’s first climate refugees, and today the people of the Carteret Group of Islands face an immediate threat to their lives and livelihood”, Mr Tsiamalili said.

“As the Bougainville Climate Envoy, I will be sending a strong message to the world about the impact of climate change on our people. I will be reaching out to key partners, as well as multilateral institutions to formulate strategies to ensure that we can protect our people against the dangers of rising sea levels, and to put in place longer term strategies to address the ongoing challenges that remain”, he said.

The appointment of the Vice Minister as Bougainville Climate Envoy is timely following the ABG’s recent decision to declare a State of Emergency in the Bougainville Atolls for 21 days in February this year.